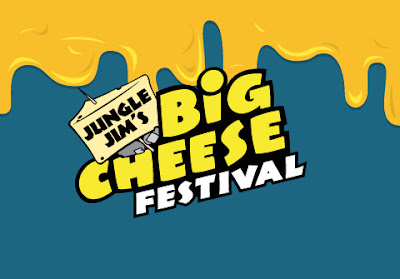 My friends and I had the great honor of attending the 2020 Jungle Jim's Big Cheese Festival in Cincinnati Ohio on February 9th. This spectacle of monumental cheese proportions was one of the cheesiest and meatiest events I've ever had the pleasure of enjoying. There were over 50 vendors of exotic and traditional cheeses, meats, wine and beer. I did my best to try every type of cheese and cheese-related dish, but it was a task that I could only partially accomplish. Please join me on this Odyssey of cheesy delights!

The excitement kicked in immediately as we made our way to the first cheese monger. Natural Valley was our first stop: 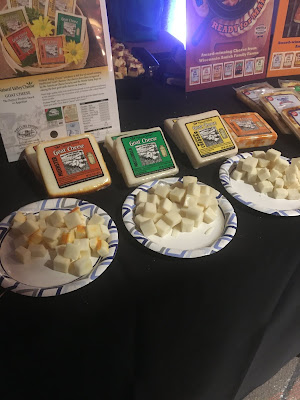 These buttery goat cheeses hit my palate like a long awaited friend. It was smooth, but it had a tangy taste on the tip of the tongue that can only be found in goats milk. I tried the muenster and the cheddar and they were simply divine. It could've been the anticipation, but this was a great start. It really put a good taste in my mouth, so to speak. (There will be a lot of cheese and eating puns - if you can't handle it, click away now.)

The next vendor we squeezed through in spite of the swelling crowd was A Dutch Masterpiece: 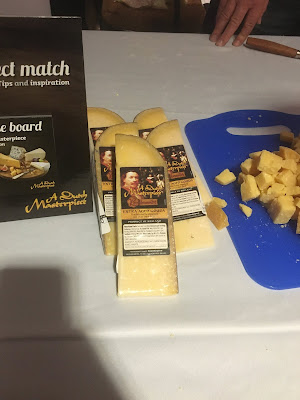 These hard cheeses were a young man's dream. These perfectly aged chunks of Gouda sprang forth in my mouth and had a sharp tang followed by an almost woody flavor. Absolutely delicious, please check these guys out if you ever get the chance.

After the initial indulgence and a kind of cheese craze we were in subsided, we realized that we would need some beverages to help cleanse our palates, having been coated by such rich and delectable cheeses. We made our way to the beer stand to purchase $30 drink bracelets. Now, I know $30 sounds like a lot but that gets you unlimited beer and wine samples and a neat commemorative glass! After a little tomfoolery, we got our drinks and headed out for more cheese. 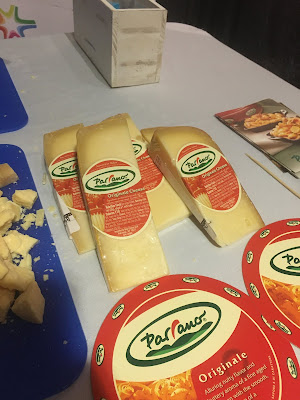 https://parrano.com/the-cheese/
This "One-of-a-Kind" cheese is truly just that. It has flavors of Parmesan but also has a smooth quality that's very unique. It doesn't crumble like a Parmesan and is a delight to the senses.
After fighting through the continuously growing crowds, we made our way to the next table, Ambrosi: 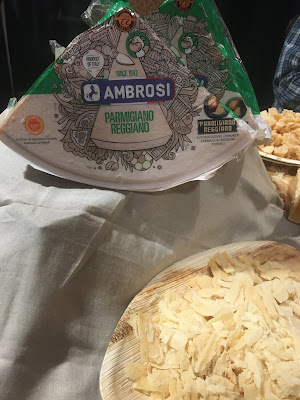 http://www.ambrosifoodusa.com/parmigiano-reggiano
This Parmesan is aged for 24 months and it is truly a king among Parmesan. I grabbed a few chips of this kingly cheese and was immediately transported to Italy.
As we waited for our next vendor, an announcement came through the loud speakers telling us not to stand in line, just get in there and grab some cheese! We did not think this was such a good idea because the crowds were at a fever pitch at this point and my girlfriend informed me that they had sold out the tickets for the event. It got a little hairy for a moment but after a delicious beer from Municipal Brew Works (http://www.municipal.beer/) we found our groove and got back to the cheese.
Next up we took a little detour to meat town. We stopped at North Country Charcuterie: 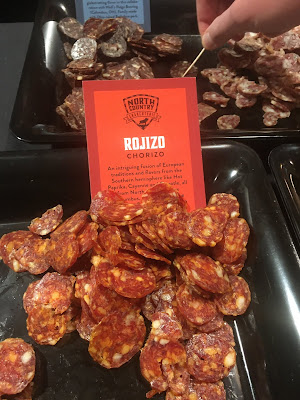 https://northcountrycharcuterie.com/
We were lucky enough to be able to try several of these incredible meats. The Lupo salami features a imperial stout in it's production and it's one of the most unique and robust flavors I've ever had in a salami. Next I tried the Rojizo chorizo - this infusion of flavors were to die for! Check them out for sure!

Continuing our way around the vendor tables that were in the shape of a upper case I, we found ourselves at Sartori: 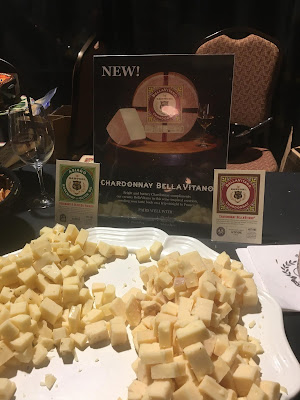 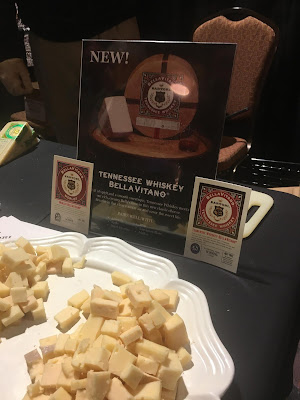 We started with the Tennessee Whiskey and Merlot which were wonders to the taste buds. The whiskey complemented the sharpness of the Bellavitano in a truly superb way. The sweetness of the merlot made the shape taste of the farmhouse cheese a little more mild, but imparted a incredibly strong wine flavor. Next, I moved to the Asiago with Rosemary and Olive Oil. The herb in the cheese was not overpowering and it was very well balanced. The Chardonnay Bellavitano was fabulous as well, sweet but not as rich as the Merlot, masterfully done.

Next we waited our turn for a very interesting looking one from Yancey's Fancy: New York Artisan Cheeses: 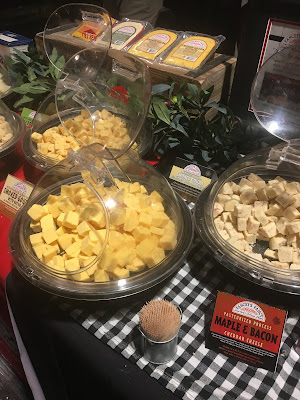 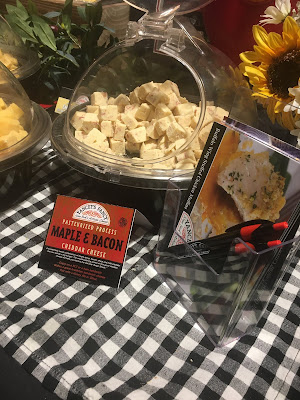 Yep, you read that right: Maple & Bacon cheddar cheese! This cheese hit you hard with maple flavor right up front, then started to dissipate, the bacon coming through on the end. An incredible feat of cheesemanship (yes, I just created a new word - deal with it). I got a piece of their Smoked Gouda as well and it was also fantastic.

After we got our taste buds rocked by that unique and perfect blend of flavors, we moved down to the next table - Burnett Dairy: 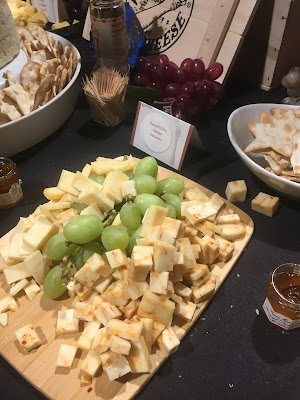 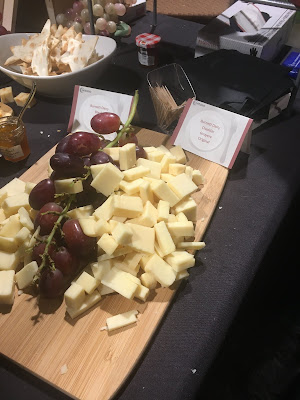 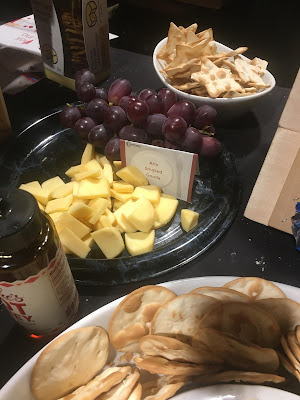 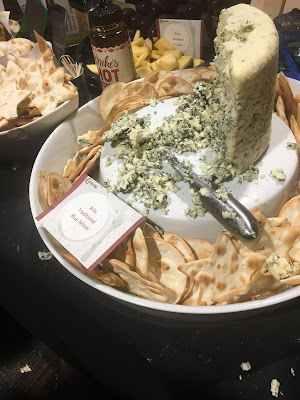 This was a smorgasbord of flavors and styles. We started with Cheddar, fresh tasting and buttery, beautiful. Moved to the Mango Habanero, spicy, sweet: everything you could ask for. Next the smoked Gouda: delicious. The smokey flavor wasn't overpowering and it had a great balance. Finally we came to our first bleu of the evening. I love bleu cheese and this one did not disappoint. It hit my tongue with that tangy aged flavor that only a bleu can supply. Bravo, Burnett Dairy, bravo.

We took another small detour to grab another beverage. This time I went for a Brown Ale from Country Boy Brewing (http://countryboybrewing.com/). This Lexington, KY based brewery really quenched my thirst and the only thing that is on par with a good cheese is a good beer. These guys know what they're doing! Check them out!

After we regrouped and found each other after a small split, we made our way to the next monger, Cypress Grove: 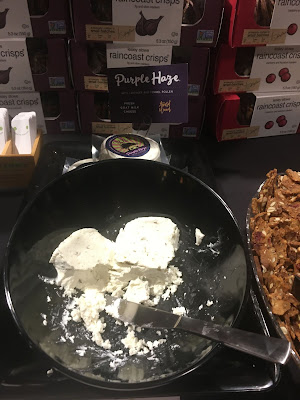 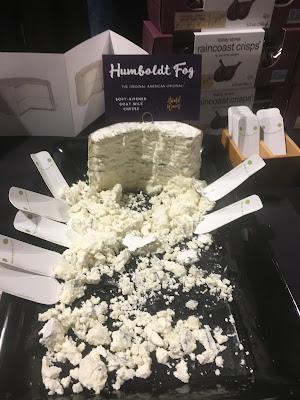 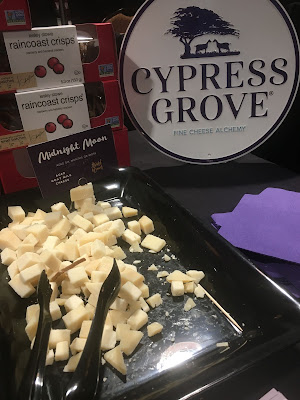 We started at Midnight with a full Moon and a creamy, tangy aged goat cheese. Then as we journeyed, there was a Purple Haze that covered our eyes as we delighted in a goat cheese with lavender and fennel seeds. After our vision cleared, we found ourselves surrounded by a Fog of the Humboldt variety, soft and ripened - a true goat cheese through and through. Thank you Cypress Grove for taking us on that adventure.

After we collected ourselves and shook our heads from the Fog, we realized we needed another drink! This time we opted from some wine. We headed over to the Winery Exchange and I grabbed a red, then back to the cheese hunt!

We were all getting pretty cheese drunk by this point and our time at the fest was coming to an end. We hit a few more vendors. At the next one, we found ourselves across the pond at Belton Farm: 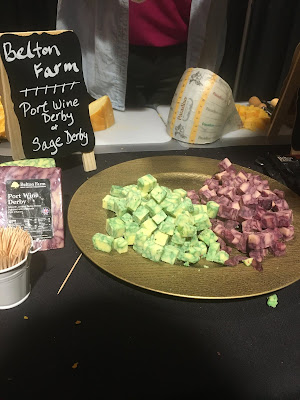 I'm not sure I had ever had a "Derby" style cheese before but I will definitely be having it again! The port wine derby was exquisitely sweet and mellow. The sage derby was green and smooth, delectable indeed. Check out this UK based cheese monger for some truly interesting combos and flavors.

After our quick jaunt to the UK we made our way to the land down under and found ourselves looking in the eye of the Old Croc: 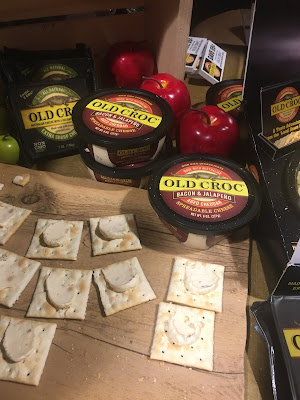 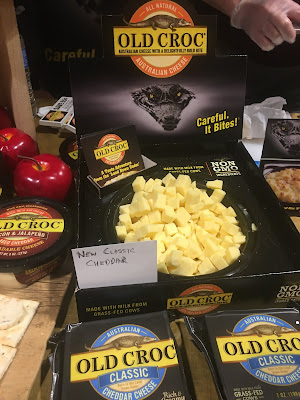 This Australian based monger has some stout and classic cheese. Non-GMO and made naturally, you can definitely taste the difference in this one! They also had some incredible spreads. One was made with bacon and jalapeno, it had a great smoky kick!

Lastly I'd like to end this cheese adventure in my favorite cheese land. That's right Bleu Cheese land!
Come with me to Carr Valley and look at these amazing blues! 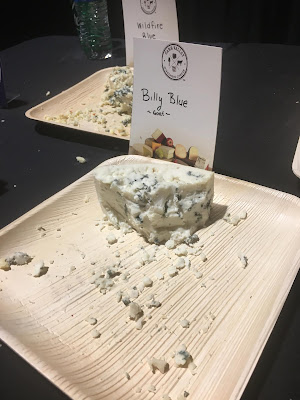 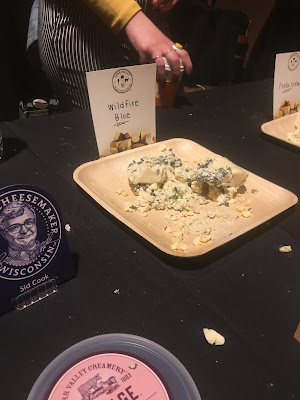 These were some of the finest bleu cheeses I've ever had the pleasure of tasting. The Billy Blue was make with goat milk and had that same smooth butter flavor but with the tang of the bleu. The Wildfire Blue had a nice kick to it. These cheeses truly changed the way I look at bleu cheese forever.

With our bellies full of cheese, beer, and wine, we packed ourselves up and headed home. This event was one of the best ways to find new and interesting flavors and I can honestly say no two cheeses were the same. It's definitely worth every penny and I will be going back next year! We only partook of the general admission, however next year, we will be indulging in the VIP experience with exclusive drinks and cheeses. I also want to point out there were other vendors there with such deligts as BBQ, mac and cheese, hot sauce vendors, and tons of other things to try as well. Maybe next year I'll include some of them! Thanks for reading and until next time keep it cheesy!